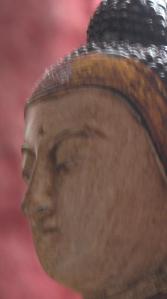 I wake early at 530, vivid dream still whispering brilliantly colored images in my mind’s eye.  The wise eye of a crow peering in my childhood bedroom window, a parade of fluffy black and white puppies strolling by.  A walk in the woods behind my neighbors house, woods I have bushwhacked through a hundred times, eaten wild strawberries from, cross country skied through, galloped on horseback through, seen Eastern Coyote, and red foxes eating field mice in, yet in my dream it is a paradise of rock formations, wild pigs, more puppies, slate waterfalls and treacherous paths where you can only take the way offered.  I find myself not thinking so much of the dream, or my hopes, nor the anger that eats me sometimes, instead I focus on my breathing, Zen meditation for the lazy.  Blankets wrapped around me, cat purring on my pillow, too cold to emerge, breathe in, breathe out.  The alarm goes off.  I get up and ride the exercise bike for 30 minutes while I read the book everyone is raving about, but is written, to me, like one of the Left Behind books, which I read one of, laughing all the way through at the trite and ridiculous writing.  The only reason I read as much as I did is because it was so bad it was funny, like the Rocky Horror Picture Show.

The book maybe isn’t that bad, but it isn’t worth the raving, now I believe of madmen and madwomen, this society, our culture is mad.  Completely and utterly.  Do you see it too?  We are out of our minds, so many of our children are disturbed, their parents are raving maniacs, drug addicts, our people are so dumb, sometimes I worry about an apocalypse, other times I think it will cull the herd, only the megalomaniacs, the charismatic, and the survivalists will make it, those with common sense will do well.   Those that don’t know enough to not wear flip flops in December will be the first to go, those that cannot do much but play video games and watch television maybe not so much. Why do I think about these things?

Speaking of madness, the weather report is utter disaster, it is a terrible storm, schools close everywhere, everywhere but here.  The drive is slow but manageable, on the way home more of the same.  Were it a typical year, nothing would have closed, but since it is the first snow fall, everything has.  Now I see why southern states close at 2 inches.  We have about 10 I think, now in the morning.  I drive to yoga, thinking I will be the only one there, but there are several people.  My leg hurts terribly, the hip and knee issue are not good, I am definitely out of balance somehow, later I will put the ibuprofen lotion on my leg for the first time, to help me sleep.

In shavasana, resting pose, I breathe deeply, focusing in, not thinking about madness, or anger, or love.  All of this life is a reflection, how beautiful is the blue sky and trees in the lightly lapping waters.  And then, and then I think, a reflection of what exactly?  The Buddha smiles.  Yes.  That is a very good question.